Hi guys ! December was a slow month for us, but we never stop working!

- The Genesis intro is going great. We might have gone a bit overboard there, because we decided to offer the genesis as a video to get the perfect transition we were aiming at. Moreover, it will be voiced in French and in English… (Maybe). We want to keep the final result secret for now, but you can discover the text [here]

- With the addition of the auto button, we felt the quick menu buttons weren’t coherent enough (i.e pretty enough). So we finally decided to redo it completely. You now have the option to choose on the setting screen if you want the full traditional quick menu, or the old one with a reminder of the shortcut / new shortcut.

- We are working hard on the encyclopaedia, 4 of the 6 entries are now written, and are being corrected and translated !

- The two new choices are almost finalised. They have been implemented in the FR version, and are being implemented on the EN one !

- To thank you for your patience, we decided to add a little surprise at the end of the update… It’s almost ready ~

Even if we try to focus on the 1.7 update, we still keep working on the overall game

- 2 more original music tracks were created for the game. You can listen to hopeful and sad.

- We now have the sprite of Elric

- We now have a hallway background

- Three scenes of the common routes have been written.

- If you missed it, we did two special Christmas illustrations :3 Mamalienor and sexy Elric !

- We are still working on the new website, it should be up soon, a little preview for your eyes only ~

- We’re running a poll on Twitter (voting is still open) until the end of December, here are the results so far : 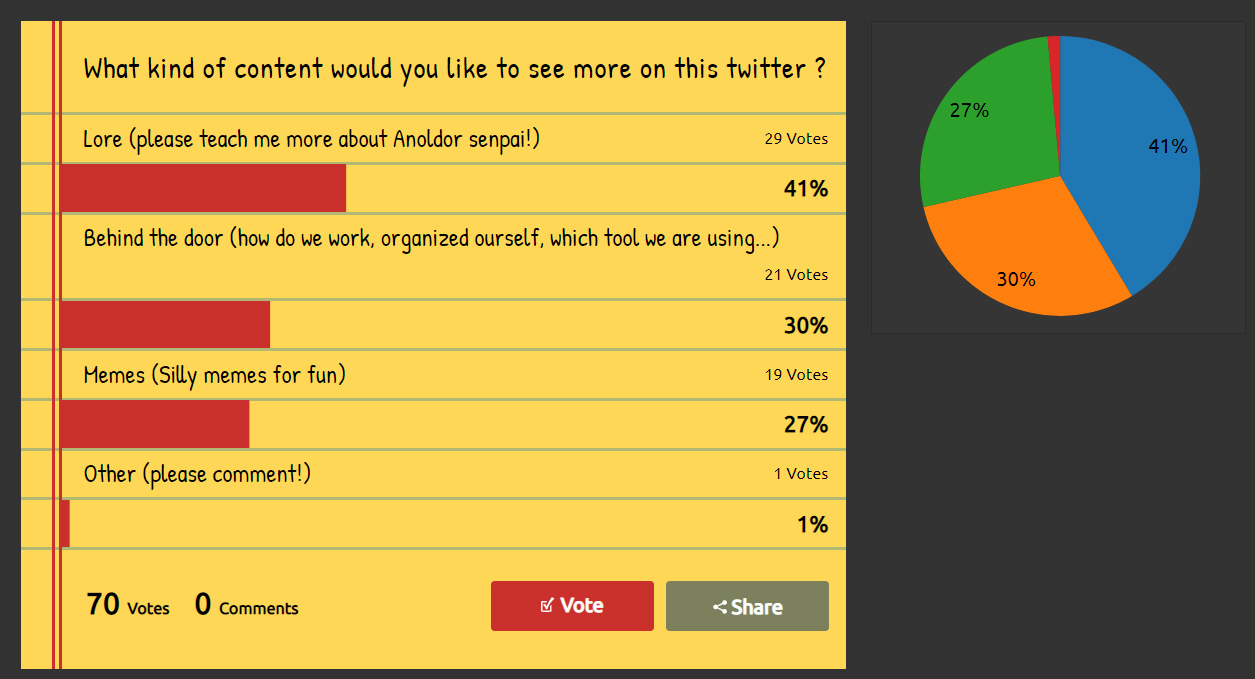 Considering these results, we will try to post regular updates for lore explanations. We don’t want to do something too heavy, so we are still looking for a way to help you know the world better but keep it light and fun.

We might post on Twitter more small behind the scenes pictures, videos or comment, but we feel like explaining how we work, why we do this way and so on, requires more characters than twitter allow us, that’s why we probably are going to do a longer article on the blog linked to our new website. Maybe written a bit in a way to help our fellow indie dev comrades !

Also, one of our followers suggested we highlight other French game for the community. For now, we decided to keep things as they were and we will try to support games we like by RT their most important tweet once per week.

Memes and silly things about characters didn’t seem to interest people, so we won’t do it for now.

> And that’s all ! For weekly news don’t hesitate to follow us on [twitter] ! Also, we really wanted to thank you again to all of your for your support, this month we kept receiving comments and followers and it really helped us to stay motivated and productive… We even reached 300 followers here on itchio, so, thank you, thank you very much to all of you ! ♥

Thank you for your understanding, we indeed rather take our time than do something bad !

Also I am curious to know what happened with all the data :p !

Sounds like things are going well!  I'm super glad and looking forward to the update.

The new background looks nice and I love Elric's sprite a lot, his smirk is fantastic and I think perfect for his background of roguish charm.

Happy New Year and thank you for all of your hard work, very excited to see what 2020 brings for this project :)

Thank you for your support, we are glad you like it so far, and we are sure 2020 will be full of achievement ! This time we are confident the update will be ready for January and we are so excited to share it !

Happy new year to you too, thank you again for your kind support and patience !